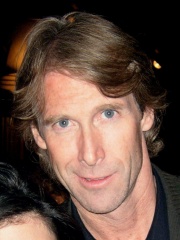 Michael Benjamin Bay (born February 17, 1965) is an American film director and producer. He is best known for making big-budget, high-concept action films characterized by fast cutting, stylistic cinematography and visuals, and extensive use of special effects, including frequent depictions of explosions. The films he has produced and directed, which include Armageddon (1998), Pearl Harbor (2001) and the Transformers film series (2007–present), have grossed over US$7.8 billion worldwide, making him one of the most commercially successful directors in history.He is co-founder of commercial production house The Institute, a.k.a. Read more on Wikipedia