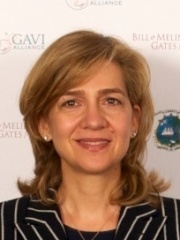 Infanta Cristina of Spain (Cristina Federica Victoria Antonia de la Santísima Trinidad de Borbón y de Grecia, born 13 June 1965) is the younger daughter of the former King and Queen of Spain Juan Carlos I and Sofía. As of 2015 she is sixth in the line of succession to the Spanish throne, after her brother King Felipe VI's children, her sister Elena, and Elena's children. From 2013 she was investigated and later tried for fraud and acquitted of corruption involving a company owned by Cristina and her husband. Read more on Wikipedia

Page views of Infanta Cristina of Spains by language

Among politicians, Infanta Cristina of Spain ranks 5,904 out of 15,577. Before her are Michelle of Valois, Alexander, Prince of Orange, Emperor Xiaowen of Northern Wei, Malcolm II of Scotland, Ashur-etil-ilani, and Federico I Gonzaga, Marquess of Mantua. After her are Arnulf I, Count of Flanders, Catalina de Erauso, Fu Jian, Sahadeva, Nuno Álvares Pereira, and Di Yi.

Among people born in 1965, Infanta Cristina of Spain ranks 38. Before her are Linda Evangelista, Moby, Sophie, Countess of Wessex, Nicholas Sparks, Michael Bay, and Vinnie Jones. After her are Scottie Pippen, Sam Mendes, Connie Nielsen, Uğur Şahin, Katarina Witt, and The Undertaker.