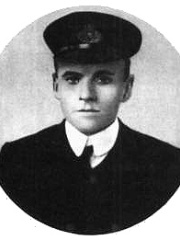 Charles Herbert Lightoller, (30 March 1874 – 8 December 1952) was a British mariner and naval officer. He was the second officer on board the RMS Titanic and the most senior member of the crew to survive the Titanic disaster. As the officer in charge of loading passengers into lifeboats on the port side, Lightoller strictly enforced the women and children only protocol, not allowing any male passengers to board the lifeboats unless they were needed as auxiliary seamen. Read more on Wikipedia

Charles Lightoller was the second officer on the Titanic and was one of the few people to survive the sinking. He helped rescue many passengers and crew members.

Among companions, Charles Lightoller ranks 293 out of 687. Before him are Anna Porphyrogenita, Rosalynn Carter, Nur Jahan, Catherine, Duchess of Cambridge, Adelaide of Aquitaine, and Maria Sophia of Neuburg. After him are Joan of Navarre, Queen of England, Queen Rania of Jordan, Kunigunda of Halych, Amestris, Zuleikha, and Isabella of Bourbon.