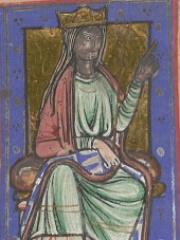 Ealhswith or Ealswitha (died 5 December 902) was the wife of King Alfred the Great. Her father was a Mercian nobleman, Æthelred Mucel, Ealdorman of the Gaini, which is thought to be an old Mercian tribal group. Her mother was Eadburh, a member of the Mercian royal family, and according to the historian Richard Abels she was a descendant of King Cenwulf of Mercia. Read more on Wikipedia

Ealhswith was the wife of King Edward the Elder. She was the daughter of Earl Algar, and sister of Earl Leofric. Her first husband was Ordgar, a nobleman from Devon.

Page views of Ealhswiths by language

Among companions, Ealhswith ranks 279 out of 687. Before her are Julia Drusilla, Christina of Saxony, Louise of Great Britain, Pat Nixon, Mary Todd Lincoln, and Joseph Ferdinand of Bavaria. After her are Flavia Maximiana Theodora, Constance of Castile, Statilia Messalina, Dorothea of Brandenburg, Elizabeth of Bohemia, and Berengaria of Portugal.