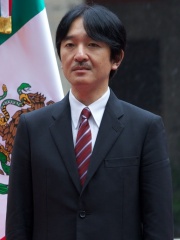 Fumihito, Prince Akishino, Crown Prince of Japan (皇嗣秋筱宮文仁親王, Kōshi Akishino-no-miya Fumihito Shinnō, born 30 November 1965, Japanese: [ɸɯmiꜜçi̥to]) is a member of the Japanese imperial family. He is the younger brother of Emperor Naruhito and the younger son of Emperor Emeritus Akihito and Empress Emerita Michiko. He is the heir presumptive to the Chrysanthemum Throne. Read more on Wikipedia

Since 2007, the English Wikipedia page of Fumihito, Prince Akishino has received more than 1,320,319 page views. His biography is available in 34 different languages on Wikipedia making him the 295th most popular nobleman.

Among noblemen, Fumihito, Prince Akishino ranks 314 out of 559. Before him are Henry IX, Duke of Bavaria, Edgar Ætheling, John II, Duke of Bourbon, Princess Louise Margaret of Prussia, Robert I, Count of Dreux, and Madeleine de La Tour d'Auvergne. After him are Duchess Anna Amalia of Brunswick-Wolfenbüttel, Edward of Middleham, Prince of Wales, William III, Duke of Aquitaine, Haakon, Crown Prince of Norway, Queen Letizia of Spain, and Rinaldo d'Este.