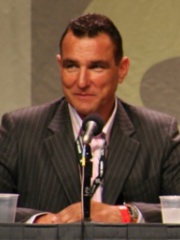 Vincent Peter Jones (born 5 January 1965) is a British actor, singer, presenter and former professional footballer who played as a midfielder from 1984 to 1999, notably for Wimbledon, Leeds United, Sheffield United, Chelsea, Queens Park Rangers and Wales. Born in Watford, Hertfordshire, England, Jones represented and captained the Welsh national football team, having qualified via a Welsh grandparent. As a member of the "Crazy Gang", he won the 1988 FA Cup Final with Wimbledon, a club for which he played well over 200 games during two spells between 1986 and 1998. Read more on Wikipedia

Since 2007, the English Wikipedia page of Vinnie Jones has received more than 5,115,124 page views. His biography is available in 40 different languages on Wikipedia making him the 1,138th most popular actor.