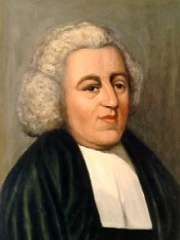 John Newton (; 4 August [O.S. 24 July] 1725 – 21 December 1807) was an English Anglican cleric, a captain of slave ships who later became an investor in the slave trade but subsequently became an abolitionist. He served as a sailor in the Royal Navy for a period after forced recruitment. Newton went to sea at a young age and worked on slave ships in the slave trade for several years. Read more on Wikipedia

Among companions, John Newton ranks 447 out of 673. Before him are Sophia of Bavaria, Berengaria of Barcelona, Adela of Flanders, Geraldine of Albania, Narriman Sadek, and Mette-Marit, Crown Princess of Norway. After him are Catherine Stenbock, Zarifa Aliyeva, Empress He, Richenza of Northeim, Sancha of Castile, Queen of Aragon, and Matilda of Frisia.