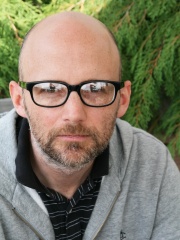 Richard Melville Hall (born September 11, 1965), known professionally as Moby, is an American musician, songwriter, singer, producer, and animal rights activist. He has sold 20 million records worldwide. AllMusic considers him to be "among the most important dance music figures of the early 1990s, helping bring dance music to a mainstream audience both in the United States and the United Kingdom".After taking up guitar and piano at age nine, he played in several underground punk rock bands through the 1980s before turning to electronic dance music. Read more on Wikipedia

Page views of Mobies by language

Among people born in 1965, Moby ranks 40. Before him are Viola Davis, Connie Nielsen, Sophie, Countess of Wessex, Vinnie Jones, Princess Stéphanie of Monaco, and Infanta Cristina of Spain. After him are The Undertaker, Martin Lawrence, Lennox Lewis, Melissa McBride, Linda Evangelista, and Raí.