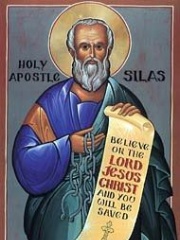 Since 2007, the English Wikipedia page of Silas has received more than 727,801 page views. His biography is available in 34 different languages on Wikipedia (up from 30 in 2019). Silas is the 672nd most popular religious figure (down from 660th in 2019), the 887th most popular biography from Italy and the 258th most popular Italian Religious Figure.

Silas is most famous for being a martyr in the Christian faith. He is said to have been a bishop in Syria. He was arrested and imprisoned by order of the Roman Emperor Diocletian, who wanted to kill Christians. Silas was thrown into a dark dungeon and left to die.

Page views of Silas by language

Among religious figures, Silas ranks 672 out of 2,238. Before him are Gertrude the Great, Hashim ibn Abd Manaf, Sa'id bin Zayd, Mahapajapati Gotami, Julia of Corsica, and John Harvard. After him are Martin de Porres, Mahākāśyapa, Lydia of Thyatira, Atiśa, Cornelius the Centurion, and Athenagoras of Athens.

Among people born in 1, Silas ranks 10. Before him are Simon the Zealot, Barnabas, Pope Linus, Pope Anacletus, Barabbas, and Thomas Bangalter. After him are Onesimus, Vologases I of Parthia, Shimon bar Yochai, Locusta, Joanna, wife of Chuza, and Sextus Afranius Burrus. Among people deceased in 100, Silas ranks 30. Before him are Ananias of Damascus, Nicodemus, Herod Agrippa II, Pontius Pilate's wife, Zebedee, and Pomponius Mela. After him are Lydia of Thyatira, Cornelius the Centurion, Philip the Evangelist, Valerius Maximus, Papias of Hierapolis, and Mary of Bethany.