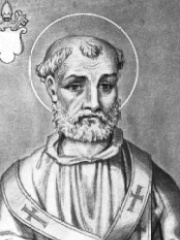 Anacletus II (died January 25, 1138), born Pietro Pierleoni, was an antipope who ruled in opposition to Pope Innocent II from 1130 until his death in 1138. After the death of Pope Honorius II, the college of cardinals was divided over his successor. Unusually, the election was entrusted to eight cardinals, who elected Papareschi (Innocent II). Read more on Wikipedia

Anacletus II was a pope who was elected by a minority of cardinals, and he was not recognized by the majority of the cardinals. He was most famous for being an antipope.

Among religious figures, Antipope Anacletus II ranks 686 out of 2,272. Before him are Mattathias, Malachi, Chaitanya Mahaprabhu, Pope Shenouda III of Alexandria, Hillel the Elder, and Piruz Nahavandi. After him are Robert of Molesme, Tryphon, Respicius, and Nympha, Joan Enric Vives Sicília, Gemma Galgani, Emma Morano, and Jacob Frank.

Among people born in 1090, Antipope Anacletus II ranks 5. Before him are Bernard of Clairvaux, Sigurd the Crusader, Geoffrey of Monmouth, and Frederick II, Duke of Swabia. After him are Eric II of Denmark, Douce I, Countess of Provence, Ulvhild Håkansdotter, and Robert, 1st Earl of Gloucester. Among people deceased in 1138, Antipope Anacletus II ranks 2. Before him is Avempace. After him are Bolesław III Wrymouth, Irene Doukaina, Ar-Rashid, and Vsevolod of Pskov.