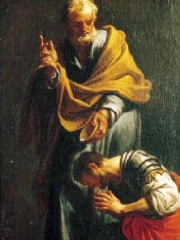 Cornelius (Greek: Κορνήλιος, romanized: Kornélios; Latin: Cornelius) was a Roman centurion who is considered by Christians to be the first Gentile to convert to the faith, as related in Acts of the Apostles (see Ethiopian eunuch for the competing tradition). The baptism of Cornelius is an important event in the history of the early Christian church. Read more on Wikipedia

Cornelius is most famous for being the first gentile to be converted to Christianity.

Page views of Cornelius the Centurions by language

Among religious figures, Cornelius the Centurion ranks 677 out of 2,238. Before him are John Harvard, Silas, Martin de Porres, Mahākāśyapa, Lydia of Thyatira, and Atiśa. After him are Athenagoras of Athens, Pope Adrian IV, Émile Benveniste, Erasmus of Formia, Romanos the Melodist, and Johann Tetzel.