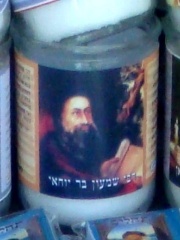 Shimon bar Yochai (Zoharic Aramaic: שמעון בר יוחאי, Shim'on bar Yoḥai) or Shimon ben Yochai (Mishnaic Hebrew: שמעון בן יוחאי, Shim'on ben Yoḥai), also known by the acronym Rashbi, was a 2nd-century tannaitic sage in ancient Judea, said to be active after the destruction of the Second Temple in 70 CE. He was one of the most eminent disciples of Rabbi Akiva. The Zohar, a 13th century foundational work of Kabbalah, is ascribed to him, but this claim is universally rejected by scholars. In addition, the important legal works called Sifre and Mekhilta are attributed to him (not to be confused with the Mekhilta of Rabbi Ishmael, of which much of the text is the same). Read more on Wikipedia

Shimon bar yochai is most famous for being a rabbi who was alive during the time of the Roman Empire. He is also known for being the author of the Zohar, a book of Jewish mysticism.

Among politicians, Shimon bar Yochai ranks 3,844 out of 15,577. Before him are Constance of Antioch, Edvard Kardelj, Anitta, Kaarlo Juho Ståhlberg, King Cheng of Zhou, and Pepin the Hunchback. After him are Gülbahar Hatun, Nouri al-Maliki, Giovanni Giolitti, Sigismund Kęstutaitis, Abdullah ibn Muhammad al-Umawi, and Haman.

Among people born in 1, Shimon bar Yochai ranks 13. Before him are Pope Anacletus, Barabbas, Thomas Bangalter, Silas, Onesimus, and Vologases I of Parthia. After him are Locusta, Joanna, wife of Chuza, Sextus Afranius Burrus, Nicanor the Deacon, Caesarius of Africa, and Aulus Cornelius Palma Frontonianus. Among people deceased in 160, Shimon bar Yochai ranks 2. Before him is Marcion of Sinope. After him are Marcus Cornelius Fronto, Valentinus, and Quintus Lollius Urbicus.