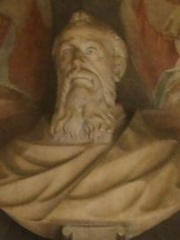 Peter Damian (Latin: Petrus Damianus; Italian: Pietro or Pier Damiani; c. 1007 – 21 or 22 February 1072 or 1073) was a reforming Benedictine monk and cardinal in the circle of Pope Leo IX. Dante placed him in one of the highest circles of Paradiso as a great predecessor of Saint Francis of Assisi and he was declared a Doctor of the Church in 1828. Read more on Wikipedia

Peter Damian was a medieval Catholic saint and hermit, who is most famous for his denunciation of the worldliness of the clergy of his day.

Among people born in 1007, Peter Damian ranks 2. Before him is Isaac I Komnenos. After him are Ouyang Xiu, Hugh Magnus, and Giselbert of Luxembourg. Among people deceased in 1072, Peter Damian ranks 4. Before him are Alp Arslan, Romanos IV Diogenes, and Sancho II of Castile and León. After him are Antipope Honorius II, Ouyang Xiu, Adalbert of Hamburg, Bagrat IV of Georgia, Ordulf, Duke of Saxony, Asadi Tusi, Ali Hujwiri, and Hereward the Wake.

Among PHYSICIANS In Italy