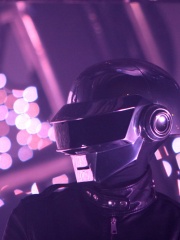 Thomas Bangalter (French: [tɔma bɑ̃ɡaltɛʁ]; born 3 January 1975) is a French musician, record producer, singer, songwriter, DJ, and composer. He is best known as one half of the former French house music duo Daft Punk, alongside Guy-Manuel de Homem-Christo. He has recorded and released music as a member of the trio Stardust, the duo Together, and as a solo artist. Read more on Wikipedia

Thomas Bangalter is most famous for being one half of the electronic music duo Daft Punk.

Among people born in 1, Thomas Bangalter ranks 11. Before him are Barnabas, Saint Matthias, Pope Linus, Saint Veronica, Pope Anacletus, and Barabbas. After him are Silas, Onesimus, Locusta, Vologases I of Parthia, Shimon bar Yochai, and Sextus Afranius Burrus.