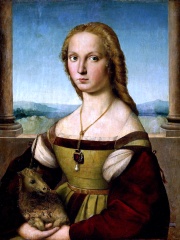 Giulia Farnese (1474 – 23 March 1524) was an Italian noblewoman, a mistress to Pope Alexander VI, and the sister of Pope Paul III. Known as Giulia la bella, meaning "Julia the beautiful" in Italian, Giulia was a member of the noble Farnese family, who were prominent leaders in the Italian regions of Parma and Piacenza. After marrying into the noble Orsini family in the Papal States, Giulia soon acquainted herself with, and initiated an affair with, the Spanish Cardinal Rodrigo de Borja. Read more on Wikipedia

Giulia Farnese is most famous for being a mistress of Pope Alexander VI.

Among religious figures, Giulia Farnese ranks 640 out of 2,238. Before her are Pontius Pilate's wife, Isaac of Nineveh, William Tyndale, Je Tsongkhapa, Basilios Bessarion, and Billy Graham. After her are Benkei, Zayd ibn Ali, Robert of Molesme, Tarcisio Bertone, John Cassian, and Onuphrius.