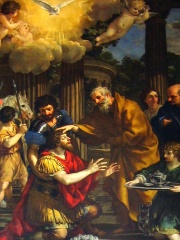 Ananias ( AN-ə-NY-əs; Ancient Greek: Ἀνανίας from Hebrew חנניה, Hananiah, "favoured of the LORD") was a disciple of Jesus at Damascus mentioned in the Acts of the Apostles in the Bible, which describes how he was sent by Jesus to restore the sight of Saul of Tarsus (who later was called Paul the Apostle) and provide him with additional instruction in the way of the Lord. Read more on Wikipedia

Ananias is most famous for being the first person to convert to Christianity after Jesus's death.

Page views of Ananias of Damascuses by language

Among people born in 100, Ananias of Damascus ranks 21. Before him are Lydia of Thyatira, Philemon, Mary the Jewess, Philip the Evangelist, Agabus, and Domitia Longina. After him are Antipas of Pergamum, Agrippa the Skeptic, Aretaeus of Cappadocia, Valentinus, Simeon of Jerusalem, and Marcus Cornelius Fronto. Among people deceased in 100, Ananias of Damascus ranks 39. Before him are Mary the Jewess, Judas of Galilee, Locusta, Philip the Evangelist, Valerius Maximus, and Agabus. After him are Agrippa the Skeptic, Gaius Julius Civilis, Joanna, wife of Chuza, Marcus Ulpius Traianus the Elder, Antonius Felix, and Archippus.