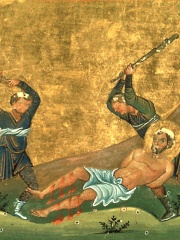 Onesimus (Greek: Ὀνήσιμος, translit. Onēsimos, meaning "useful"; died c. 68 AD, according to Catholic tradition), also called Onesimus of Byzantium and The Holy Apostle Onesimus in the Eastern Orthodox Church, was probably a slave to Philemon of Colossae, a man of Christian faith. He may also be the same Onesimus named by Ignatius of Antioch (died c. 107) as bishop in Ephesus which would put Onesimus's death closer to 95. Read more on Wikipedia

Onesimus is most famous for his role in the book of Philemon. Onesimus was a slave to Philemon, and he ran away from his master. Paul, a Christian, met Onesimus and converted him to Christianity. Onesimus then returned to Philemon, his master, and asked for forgiveness.

Page views of Onesimuses by language

Among religious figures, Onesimus ranks 725 out of 2,238. Before him are Josephine Bakhita, Romuald, Therese Neumann, Patriarch Nikon of Moscow, John the Merciful, and Umm Kulthum bint Ali. After him are Nectarios of Aegina, Papias of Hierapolis, Emma Morano, Nikephoros I of Constantinople, Andrea Amati, and Karmapa.

Among people born in 1, Onesimus ranks 11. Before him are Barnabas, Pope Linus, Pope Anacletus, Barabbas, Thomas Bangalter, and Silas. After him are Vologases I of Parthia, Shimon bar Yochai, Locusta, Joanna, wife of Chuza, Sextus Afranius Burrus, and Nicanor the Deacon. Among people deceased in 90, Onesimus ranks 2. Before him is Pedanius Dioscorides. After him is Artabanus III of Parthia.