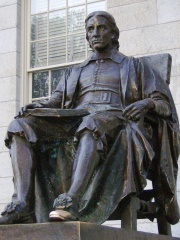 John Harvard (1607–1638) was an English dissenting minister in Colonial America whose deathbed bequest to the "schoale or colledge" founded two years earlier by the Massachusetts Bay Colony was so gratefully received that it was consequently ordered "that the Colledge agreed upon formerly to bee built at Cambridge shalbee called Harvard Colledge."Harvard University considers him the most honored of its founders—those whose efforts and contributions in its early days "ensure[d] its permanence"—and a statue in his honor is a prominent feature of Harvard Yard. Read more on Wikipedia

Among religious figures, John Harvard ranks 671 out of 2,238. Before him are Ludmila of Bohemia, Gertrude the Great, Hashim ibn Abd Manaf, Sa'id bin Zayd, Mahapajapati Gotami, and Julia of Corsica. After him are Silas, Martin de Porres, Mahākāśyapa, Lydia of Thyatira, Atiśa, and Cornelius the Centurion.