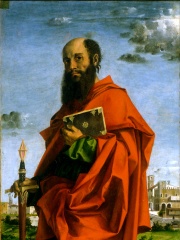 Paul (previously called Saul of Tarsus; c. 5 – c. 64/65 AD), commonly known as Paul the Apostle and Saint Paul, was a Christian apostle who spread the teachings of Jesus in the first-century world. Generally regarded as one of the most important figures of the Apostolic Age, he founded several Christian communities in Asia Minor and Europe from the mid-40s to the mid-50s AD.According to the New Testament book Acts of the Apostles, Paul was a Pharisee. He participated in the persecution of early disciples of Jesus, possibly Hellenised diaspora Jews converted to Christianity, in the area of Jerusalem, prior to his conversion. Read more on Wikipedia

Page views of Paul the Apostles by language

Among religious figures, Paul the Apostle ranks 8 out of 2,238. Before him are Jesus, Moses, Martin Luther, Abraham, Mary, mother of Jesus, and Pope Francis. After him are Solomon, Saint Peter, John the Baptist, Zoroaster, Saint Nicholas, and Jacob.