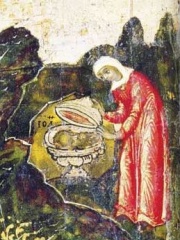 Joanna (Koinē Greek: Ἰωάννα, romanized: Iōanna, also Greek: Ἰωάνα), the wife of Chuza (γυνὴ Χουζᾶ), is a woman mentioned in the gospels who was healed by Jesus and later supported him and his disciples in their travels. She is one of the women recorded in the Gospel of Luke as accompanying Jesus and the twelve apostles and as a witness to Jesus' resurrection. Read more on Wikipedia

Page views of Joanna, wife of Chuzas by language

Among religious figures, Joanna, wife of Chuza ranks 881 out of 2,238. Before her are Mary of Jesus de León y Delgado, Hermenegild, Anna Göldi, Carlo Maria Viganò, Arnold of Brescia, and Gerolamo Emiliani. After her are Eleazar, Louise de Marillac, Lambert of Maastricht, Methodios I of Constantinople, Al-Bayhaqi, and Jeanne Guyon.