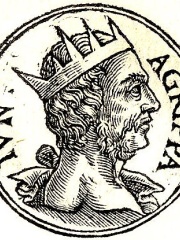 Herod Agrippa II (Hebrew: אגריפס; AD 27/28 – c. 92 or 100), officially named Marcus Julius Agrippa and sometimes shortened to Agrippa, was the last ruler from the Herodian dynasty, reigning over territories outside of Judea as a Roman client. Read more on Wikipedia

Herod Agrippa II is most famous for being the last king of the Herodian dynasty. He was a grandson of Herod the Great and the son of Aristobulus IV and Berenice. He succeeded his father as king of Judea in 44 AD, when he was only 17 years old.

Among politicians, Herod Agrippa II ranks 2,224 out of 15,577. Before him are Ajatashatru, Emperor Daizong of Tang, William Lamb, 2nd Viscount Melbourne, Afonso II of Portugal, Anastasio Somoza Debayle, and Sergo Ordzhonikidze. After him are Stanley Baldwin, Ernest Augustus, King of Hanover, Louis Blanc, Yaropolk I of Kiev, Aurelius Victor, and Halimah Yacob.

Among people born in 28, Herod Agrippa II ranks 1. After him are Berenice and Emperor Ming of Han. Among people deceased in 100, Herod Agrippa II ranks 26. Before him are Apollonius of Tyana, Simon of Cyrene, Saint Sarah, Anna the Prophetess, Ananias of Damascus, and Nicodemus. After him are Pontius Pilate's wife, Zebedee, Pomponius Mela, Silas, Lydia of Thyatira, and Cornelius the Centurion.