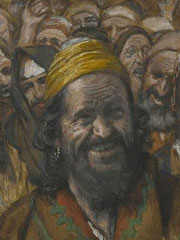 Barabbas (; Biblical Greek: Bαραββᾶς, romanized: Barabbās) was, according to the New Testament, a prisoner who was chosen by the crowd in Jerusalem, over Jesus, to be pardoned and released by Roman governor Pontius Pilate at the Passover feast. Read more on Wikipedia

Barabbas is most famous for being the prisoner who was released instead of Jesus in the New Testament.

Page views of Barabbas by language

Among religious figures, Barabbas ranks 333 out of 2,238. Before him are Pope Martin I, Sabbatai Zevi, Pope Nicholas IV, Pope Damasus II, Ephrem the Syrian, and James, son of Alphaeus. After him are Philip Neri, Pope Eugene I, Pope Benedict I, Pope Eutychian, Pope Adeodatus II, and Simeon Stylites.

Among people born in 1, Barabbas ranks 9. Before him are Thomas the Apostle, Simon the Zealot, Barnabas, Pope Linus, Saint Veronica, and Pope Anacletus. After him are Thomas Bangalter, Silas, Onesimus, Vologases I of Parthia, Shimon bar Yochai, and Locusta. Among people deceased in 100, Barabbas ranks 15. Before him are Salome, Zechariah, John the Evangelist, Zacchaeus, Caiaphas, and Longinus. After him are Dionysius the Areopagite, Herodias, Thecla, Salome, Apollonius of Tyana, and Simon of Cyrene.