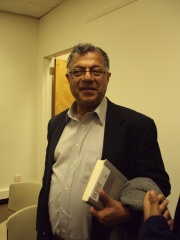 Girish Karnad (19 May 1938 – 10 June 2019) was an Indian actor, film director, Kannada writer, playwright and a Jnanpith awardee, who predominantly worked in South Indian cinema and Bollywood. His rise as a playwright in the 1960s marked the coming of age of modern Indian playwriting in Kannada, just as Badal Sarkar did in Bengali, Vijay Tendulkar in Marathi, and Mohan Rakesh in Hindi. He was a recipient of the 1998 Jnanpith Award, the highest literary honour conferred in India.For four decades Karnad composed plays, often using history and mythology to tackle contemporary issues. Read more on Wikipedia

Among actors, Girish Karnad ranks 3,777 out of 10,030. Before him are Anna Torv, Ann Sheridan, Chace Crawford, Jason O'Mara, Jason Lee, and John Larroquette. After him are Benedicta Boccoli, So Ji-sub, Julia Louis-Dreyfus, Zhao Wei, JoBeth Williams, and Joanna Pacuła.