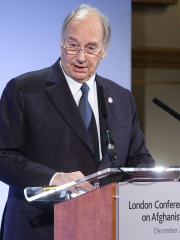 Shāh Karim al-Husayni (born 13 December 1936), known by the religious title Mawlānā Hazar Imam by his Ismaili followers and elsewhere as Aga Khan IV, is the 49th and current Imam of Nizari Ismailis, a denomination within Shia Islam. He has held the position of imam and the title of Aga Khan since 11 July 1957, when, at the age of 20, he succeeded his grandfather, Sir Sultan Muhammad Shah Aga Khan III. The Aga Khan claims direct lineal descent from the Islamic prophet Muhammad through Muhammad's cousin and son-in-law, Ali, considered an imam in Shia Islam, and Ali's wife Fatima, Muhammad's daughter from his first marriage. His grandfather, Aga Khan III, states in his memoirs that the Shias had a "need (for) Divine guidance" after the Prophet of Islam's death, this need being fulfilled by the Imamate. Read more on Wikipedia

Aga Khan IV is most famous for being the spiritual leader of the Ismaili Muslim community.

Among BUSINESSPEOPLE In Switzerland