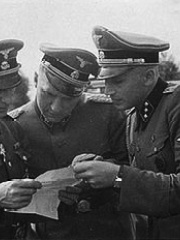 Richard Baer (9 September 1911 – 17 June 1963) was a German SS officer who, among other assignments, was the commandant of Auschwitz I concentration camp from May 1944 to January 1945, and right after, from February to April 1945, commandant of Mittelbau-Dora concentration camp. Following the war, Baer lived under an assumed name to avoid prosecution but was recognized and arrested in December 1960. Read more on Wikipedia

Richard Baer was a Nazi war criminal who was captured in 1962 and tried in the Frankfurt Auschwitz Trials. He was found guilty of war crimes and sentenced to life in prison.

Among politicians, Richard Baer ranks 2,898 out of 15,577. Before him are Ferhat Abbas, Bolesław Bierut, Đurađ Branković, Reccared I, Prajadhipok, and Ivan Asen II of Bulgaria. After him are Zhang Xueliang, Külüg Khan, 3rd Dalai Lama, Henry of Bohemia, Psamtik II, and Louis II of Anjou.