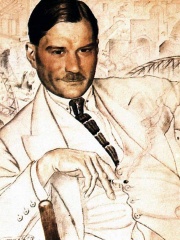 Yevgeny Ivanovich Zamyatin (Russian: Евге́ний Ива́нович Замя́тин, IPA: [jɪvˈɡʲenʲɪj ɪˈvanəvʲɪtɕ zɐˈmʲætʲɪn]; 1 February [O.S. 20 January] 1884 – 10 March 1937), sometimes anglicized as Eugene Zamyatin, was a Russian author of science fiction, philosophy, literary criticism, and political satire. Despite being the son of a Russian Orthodox priest, Zamyatin lost his faith in Christianity at an early age and became a Bolshevik. As a member of his Party's Pre-Revolutionary underground, Zamyatin was repeatedly arrested, beaten, imprisoned, and exiled. Read more on Wikipedia

Yevgeny Zamyatin is most famous for his novel We, which was published in 1924.

Among writers, Yevgeny Zamyatin ranks 552 out of 5,755. Before him are Alfred Jarry, Aulus Gellius, Gaius Julius Hyginus, A. A. Milne, Heinrich Mann, and Luo Guanzhong. After him are Georg Trakl, Denis of Portugal, Mihai Eminescu, Abai Qunanbaiuly, Longus, and Paul Lafargue.