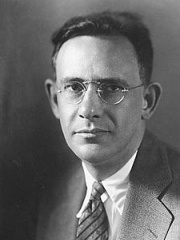 Edward Sapir (; January 26, 1884 – February 4, 1939) was an American anthropologist-linguist, who is widely considered to be one of the most important figures in the early development of the discipline of linguistics.Sapir was born in German Pomerania. His family emigrated to the United States of America when he was a child. He studied Germanic linguistics at Columbia, where he came under the influence of Franz Boas, who inspired him to work on Native American languages. While finishing his Ph.D. Read more on Wikipedia

Since 2007, the English Wikipedia page of Edward Sapir has received more than 306,581 page views. His biography is available in 49 different languages on Wikipedia making him the 12th most popular linguist.