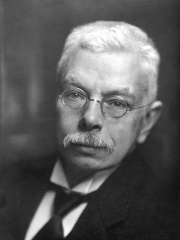 Pieter Zeeman (Dutch: [ˈzeːmɑn]; 25 May 1865 – 9 October 1943) was a Dutch physicist who shared the 1902 Nobel Prize in Physics with Hendrik Lorentz for his discovery of the Zeeman effect. Read more on Wikipedia

Pieter Zeeman is most famous for his discovery of the Zeeman effect, which is the splitting of a spectral line into several components in the presence of a magnetic field.

Among people born in 1865, Pieter Zeeman ranks 4. Before him are Jean Sibelius, George V, and Rudyard Kipling. After him are Erich Ludendorff, Ferdinand I of Romania, Warren G. Harding, Archduke Otto of Austria, W. B. Yeats, Alexander Glazunov, Carl Nielsen, and Paul Dukas. Among people deceased in 1943, Pieter Zeeman ranks 6. Before him are Nikola Tesla, Sergei Rachmaninoff, David Hilbert, Karl Landsteiner, and Isoroku Yamamoto. After him are Camille Claudel, Simone Weil, Boris III of Bulgaria, Henrik Pontoppidan, Theodor Eicke, and Yakov Dzhugashvili.

Among PHYSICISTS In Netherlands