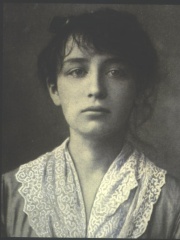 Camille Rosalie Claudel (French pronunciation: [kamij klodɛl] (listen); 8 December 1864 – 19 October 1943) was a French sculptor known for her figurative works in bronze and marble. She died in relative obscurity, but later gained recognition for the originality and quality of her work. The subject of several biographies and films, Claudel is well known for her sculptures including The Waltz and The Mature Age.The national Camille Claudel Museum in Nogent-sur-Seine opened in 2017. Read more on Wikipedia

Camille Claudel was a French sculptor, and one of the few female sculptors of the 19th century. Her most famous work is a bust of her sister, Rose.

Among sculptors, Camille Claudel ranks 8 out of 189. Before her are Phidias, Myron, Praxiteles, Polykleitos, Benvenuto Cellini, and Alberto Giacometti. After her are Lysippos, Lorenzo Ghiberti, Antonio Canova, Constantin Brâncuși, Bertel Thorvaldsen, and Scopas.

Among SCULPTORS In France