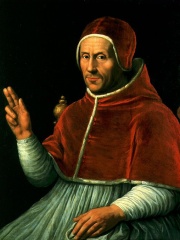 Pope Adrian VI (Latin: Hadrianus VI; Dutch: Adrianus/Adriaan VI), born Adriaan Florensz Boeyens (2 March 1459 – 14 September 1523), was head of the Catholic Church and ruler of the Papal States from 9 January 1522 until his death on 14 September 1523. The only Dutchman to become pope, he was the last non-Italian pope until Polish John Paul II 455 years later. Born in the Episcopal principality of Utrecht, Adrian studied at the University of Leuven in the Low Countries, where he rose to the position of professor of theology, also serving as rector (the equivalent of vice-chancellor). Read more on Wikipedia

Among religious figures, Pope Adrian VI ranks 84 out of 2,272. Before him are Margaret the Virgin, Jude the Apostle, Philip the Apostle, Ezekiel, Pope Pius X, and Pope Paul III. After him are Catherine of Alexandria, Simon the Zealot, Pope Benedict XV, Bernard of Clairvaux, Pope Leo X, and Girolamo Savonarola.