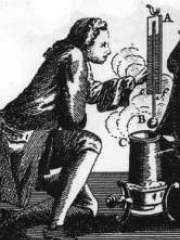 Daniel Gabriel Fahrenheit FRS (; German: [ˈfaːʁənhaɪt]; 24 May 1686 – 16 September 1736) was a physicist, inventor, and scientific instrument maker. Fahrenheit was born in Danzig (Gdańsk), then a predominantly German-speaking city in the Pomeranian Voivodeship of the Polish–Lithuanian Commonwealth, but lived most of his life in the Dutch Republic (1701–1736) and was one of the notable figures in the Golden Age of Dutch science and technology. A pioneer of exact thermometry, he helped lay the foundations for the era of precision thermometry by inventing the mercury-in-glass thermometer (first widely used, practical, accurate thermometer) and Fahrenheit scale (first standardized temperature scale to be widely used). Read more on Wikipedia

Since 2007, the English Wikipedia page of Daniel Gabriel Fahrenheit has received more than 559,056 page views. His biography is available in 67 different languages on Wikipedia making him the 26th most popular physicist.

Among PHYSICISTS In Poland