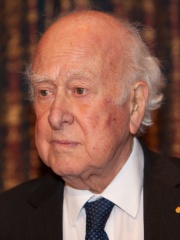 Peter Ware Higgs (born 29 May 1929) is a British theoretical physicist, Emeritus Professor in the University of Edinburgh, and Nobel Prize laureate for his work on the mass of subatomic particles.In the 1960s, Higgs proposed that broken symmetry in electroweak theory could explain the origin of mass of elementary particles in general and of the W and Z bosons in particular. This so-called Higgs mechanism, which was proposed by several physicists besides Higgs at about the same time, predicts the existence of a new particle, the Higgs boson, the detection of which became one of the great goals of physics. On 4 July 2012, CERN announced the discovery of the boson at the Large Hadron Collider. The Higgs mechanism is generally accepted as an important ingredient in the Standard Model of particle physics, without which certain particles would have no mass.Higgs has been honoured with a number of awards in recognition of his work, including the 1981 Hughes Medal from the Royal Society; the 1984 Rutherford Medal from the Institute of Physics; the 1997 Dirac Medal and Prize for outstanding contributions to theoretical physics from the Institute of Physics; the 1997 High Energy and Particle Physics Prize by the European Physical Society; the 2004 Wolf Prize in Physics; the 2009 Oskar Klein Memorial Lecture medal from the Royal Swedish Academy of Sciences; the 2010 American Physical Society J. J. Read more on Wikipedia

Peter Higgs is most famous for his theory of the Higgs Boson, which is a subatomic particle that gives mass to other particles.