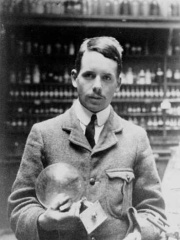 Henry Gwyn Jeffreys Moseley (; 23 November 1887 – 10 August 1915) was an English physicist, whose contribution to the science of physics was the justification from physical laws of the previous empirical and chemical concept of the atomic number. This stemmed from his development of Moseley's law in X-ray spectra. Moseley's law advanced atomic physics, nuclear physics and quantum physics by providing the first experimental evidence in favour of Niels Bohr's theory, aside from the hydrogen atom spectrum which the Bohr theory was designed to reproduce. Read more on Wikipedia

Since 2007, the English Wikipedia page of Henry Moseley has received more than 884,598 page views. His biography is available in 43 different languages on Wikipedia making him the 179th most popular physicist.