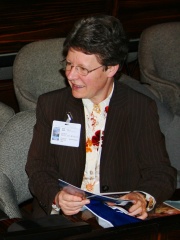 Dame Susan Jocelyn Bell Burnell (; born 15 July 1943) is an astrophysicist from Northern Ireland who, as a postgraduate student, discovered the first radio pulsars in 1967. The discovery was recognised by the award of the 1974 Nobel Prize in Physics but, despite being the first person to discover the pulsars, she was not one of the recipients of the prize.The paper announcing the discovery of pulsars had five authors. Bell's thesis supervisor Antony Hewish was listed first, Bell second. Read more on Wikipedia

Jocelyn Bell Burnell is most famous for her discovery of pulsars, which are neutron stars that emit electromagnetic radiation.