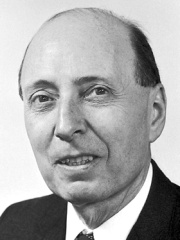 Eugene Paul "E. P." Wigner (Hungarian: Wigner Jenő Pál, pronounced [ˈviɡnɛr ˈjɛnøː ˈpaːl]; November 17, 1902 – January 1, 1995) was a Hungarian-American theoretical physicist and also contributed to mathematical physics. He received the Nobel Prize in Physics in 1963 "for his contributions to the theory of the atomic nucleus and the elementary particles, particularly through the discovery and application of fundamental symmetry principles".A graduate of the Technical University of Berlin, Wigner worked as an assistant to Karl Weissenberg and Richard Becker at the Kaiser Wilhelm Institute in Berlin, and David Hilbert at the University of Göttingen. Wigner and Hermann Weyl were responsible for introducing group theory into physics, particularly the theory of symmetry in physics. Read more on Wikipedia

Eugene Wigner is most famous for his work in quantum mechanics. He is credited with the discovery of the Wigner's Friend paradox, and he was awarded the Nobel Prize in Physics in 1963.

Among PHYSICISTS In Hungary