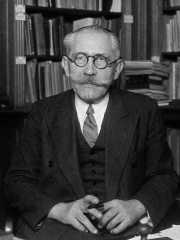 Paul Langevin (; French: [pɔl lɑ̃ʒvɛ̃]; 23 January 1872 – 19 December 1946) was a French physicist who developed Langevin dynamics and the Langevin equation. He was one of the founders of the Comité de vigilance des intellectuels antifascistes, an anti-fascist organization created after the 6 February 1934 far right riots. Being a public opponent of fascism in the 1930s resulted in his arrest and being held under house arrest by the Vichy government for most of World War II. Langevin was also president of the Human Rights League (LDH) from 1944 to 1946, having recently joined the French Communist Party. Read more on Wikipedia

Paul Langevin is most famous for his work in the field of quantum mechanics. He was one of the first people to propose a solution to the wave-particle duality paradox, which is the idea that light can behave as both a particle and a wave.