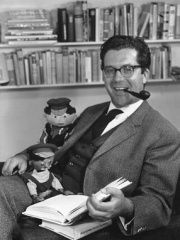 Michael Andreas Helmuth Ende (12 November 1929 – 28 August 1995) was a German writer of fantasy and children's fiction. He is best known for his epic fantasy The Neverending Story; other famous works include Momo and Jim Button and Luke the Engine Driver. His works have been translated into more than 40 languages, sold more than 35 million copies, and adapted as motion pictures, stage plays, operas and audio books. Read more on Wikipedia

Michael Ende is most famous for his book, The Neverending Story.

Among writers, Michael Ende ranks 282 out of 5,794. Before him are Paul Valéry, Jordanes, Karl May, Alice Munro, Primo Levi, and Anna Wintour. After him are Leopold von Sacher-Masoch, Chrétien de Troyes, Al-Masudi, Marguerite Duras, Marguerite de Navarre, and Eckhart Tolle.