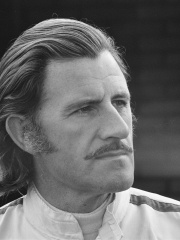 Norman Graham Hill (15 February 1929 – 29 November 1975) was a British racing driver and team owner, who was the Formula One World Champion twice, winning in 1962 and 1968 as well as being runner up on three occasions (1963, 1964 and 1965). Despite not passing his driving test until 1953 when he was already 24 years of age, and only entering the world of motor racing a year later in 1954, Hill would go on to become one of the greatest drivers of his generation. Perhaps the greatest achievement of his career was becoming the first driver (and to date the only in the history of the sport) to win the Triple Crown of Motorsport, an achievement which was defined as winning the 24 Hours of Le Mans, the Indianapolis 500, and the Formula One World Drivers' Championship. Read more on Wikipedia

Graham Hill is most famous for being the only driver to have won the Formula One World Championship in a car of his own construction.