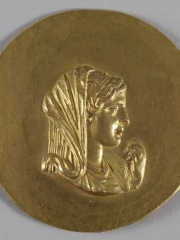 Olympias (Ancient Greek: Ὀλυμπιάς, pronounced [olympiás], c. 375–316 BC) was the daughter of king Neoptolemus I of Epirus, the sister of Alexander I of Epirus, the fourth wife of Philip II, the king of the ancient Greek kingdom of Macedonia and the mother of Alexander the Great. She was extremely influential in Alexander's life and was recognized as de facto leader of Macedon during Alexander's conquests. Read more on Wikipedia

Since 2007, the English Wikipedia page of Olympias has received more than 952,374 page views. Her biography is available in 44 different languages on Wikipedia making her the 22nd most popular companion.

Page views of Olympias by language

Among companions, Olympias ranks 21 out of 586. Before her are Khadija bint Khuwaylid, Catherine of Aragon, Nurbanu Sultan, Roxana, Lucretia, and Ankhesenamun. After her are Joseph Bonaparte, Messalina, Aspasia, Mileva Marić, Theodora, and Jane Seymour.

Others Deceased in 316 BC

Among COMPANIONS In Greece