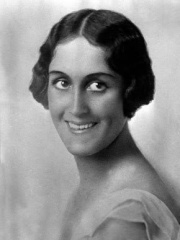 Princess Aspasia of Greece and Denmark (born Aspasia Manos Greek: Ασπασία Μάνου; 4 September 1896 – 7 August 1972) was a Greek aristocrat who became the wife of Alexander I, King of Greece. Due to the controversy over her marriage, she was styled Madame Manos instead of Queen Aspasia, until recognized as Princess Aspasia of Greece and Denmark after Alexander's death and the restoration of King Constantine I, on 10 September 1922. Daughter of Colonel Petros Manos, aide-de-camp of King Constantine I of Greece, and Maria Argyropoulos (Petros Manos and Maria Argyropoulos were both descendants of most prominent Greek Phanariote families of Constantinople and descendants of ruling Princes of Transylvania, Wallachia and Moldavia), Aspasia grew up close to the royal family. Read more on Wikipedia

Among companions, Aspasia Manos ranks 510 out of 673. Before her are Gaius Laelius Sapiens, Princess Isabella of Bavaria, Anna Maria of the Palatinate, Landgravine Marie Louise of Hesse-Kassel, William V, Marquess of Montferrat, and Maria of Navarre. After her are Maria Salviati, Eleanor of Anjou, Anna of Cilli, Matilda of Germany, Countess Palatine of Lotharingia, Marie of Champagne, and Fernán González of Castile.

Among COMPANIONS In Greece