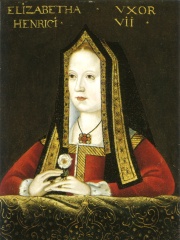 Elizabeth of York (11 February 1466 – 11 February 1503) was Queen of England from her marriage to King Henry VII on 18 January 1486 until her death in 1503. Elizabeth married Henry after his victory at the Battle of Bosworth Field, which marked the end of the Wars of the Roses. Together, they had seven children. Elizabeth's younger brothers, the "Princes in the Tower", mysteriously disappeared shortly after the death of her father, King Edward IV. Although the 1484 act of Parliament Titulus Regius declared the marriage of her parents, Edward and Elizabeth Woodville, invalid, she and her sisters were subsequently welcomed back to court by Edward's brother, King Richard III. Read more on Wikipedia

Elizabeth of York is most famous for being the daughter of King Edward IV and Elizabeth Woodville, and the mother of King Henry VIII.

Page views of Elizabeth of Yorks by language

Among companions, Elizabeth of York ranks 27 out of 687. Before her are Nurbanu Sultan, Messalina, Aspasia, Jane Seymour, Françoise d'Aubigné, Marquise de Maintenon, and Joseph Bonaparte. After her are Theodora, Mileva Marić, Klara Hitler, Maria Theresa of Spain, Queen Silvia of Sweden, and Olympias.

Among people born in 1466, Elizabeth of York ranks 3. Before her are Erasmus and Moctezuma II. After her are Andrea Doria, Quentin Matsys, Alonso de Ojeda, Francesco II Gonzaga, Marquess of Mantua, Giovanni Sforza, Ottaviano Petrucci, and Ashikaga Yoshitane. Among people deceased in 1503, Elizabeth of York ranks 3. Before her are Pope Alexander VI and Pope Pius III. After her are Sophia Palaiologina, Piero the Unfortunate, Margaret of York, Sten Sture the Elder, Peter II, Duke of Bourbon, George, Duke of Bavaria, Bona of Savoy, Pierre d'Aubusson, and Giovanni Pontano.