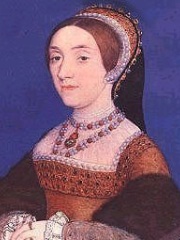 Catherine Howard (c. 1523 – 13 February 1542), also spelled Katherine Howard, was Queen Consort of England from 1540 until 1541 as the fifth wife of Henry VIII. She was the daughter of Lord Edmund Howard and Joyce Culpeper, cousin to Anne Boleyn (the second wife of Henry VIII), and niece to Thomas Howard, 3rd Duke of Norfolk. Thomas Howard was a prominent politician at Henry's court, and he secured her a place in the household of Henry's fourth wife, Anne of Cleves, where she caught the King's interest. She married him on 28 July 1540 at Oatlands Palace in Surrey, just 19 days after the annulment of his marriage to Anne. Read more on Wikipedia

Catherine Howard is most famous for being the fifth wife of King Henry VIII. She was married to the king for a mere 18 months before he had her executed for treason and adultery.

Among companions, Catherine Howard ranks 56 out of 687. Before her are Ingrid of Sweden, Livia, Hafsa bint Umar, Princess Helena of the United Kingdom, Tughril, and Isabeau of Bavaria. After her are Claude of France, Sophie, Duchess of Hohenberg, Catherine Parr, Bathsheba, Guinevere, and Mordred.