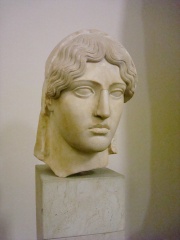 Aspasia (; Greek: Ἀσπασία Greek: [aspasíaː]; c. 470 – after 428 BC) was a metic woman in Classical Athens. Born in Miletus, she moved to Athens and began a relationship with the statesman Pericles, with whom she had a son, Pericles the Younger. According to the traditional historical narrative, she worked as a courtesan and was tried for asebeia (impiety), though modern scholars have questioned the factual basis for either of these claims, which both derive from ancient comedy. Read more on Wikipedia

Aspasia was a woman who was born in Miletus, Asia Minor. She was the mistress of Pericles, the leader of Athens. She was famous for her intelligence and wit.

Page views of Aspasias by language

Among companions, Aspasia ranks 25 out of 673. Before her are Jane Seymour, Ankhesenamun, Roxana, Bathsheba, Elizabeth of York, and Joseph Bonaparte. After her are Victoria, Princess Royal, Catherine Howard, Olympias, Queen Silvia of Sweden, Messalina, and Klara Hitler.

Among people born in 470 BC, Aspasia ranks 2. Before her is Socrates. After her are Mozi, Philolaus, Melissus of Samos, Callicrates, Hippocrates of Chios, Achilles Painter, and Teres I. Among people deceased in 400 BC, Aspasia ranks 1. After her are Xanthippe, Damocles, Zeuxis, Ctesias, Teos of Egypt, Eubulides, Leochares, Parysatis, Alcamenes, Phaedo of Elis, and Thaïs.