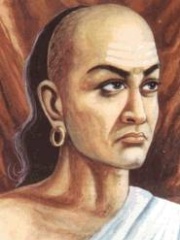 Chanakya (IAST: Cāṇakya, pronunciation ) was an ancient Indian teacher, philosopher, economist, jurist and royal advisor. He is traditionally identified as Kauṭilya or Vishnugupta, who authored the ancient Indian political treatise, the Arthashastra, a text dated to roughly between the 3rd century BCE and the 3rd century CE. As such, he is considered the pioneer of the field of political science and economics in India, and his work is thought of as an important precursor to classical economics. His works were lost near the end of the Gupta Empire in the 6th century CE and not rediscovered until the early 20th century.Chanakya assisted the first Mauryan emperor Chandragupta in his rise to power. Read more on Wikipedia

Since 2007, the English Wikipedia page of Chanakya has received more than 4,358,805 page views. His biography is available in 101 different languages on Wikipedia making him the 145th most popular philosopher.

Page views of Chanakyas by language

Among philosophers, Chanakya ranks 144 out of 1,005. Before him are Johann Friedrich Herbart, Jiddu Krishnamurti, Leucippus, Clement of Alexandria, Simone Weil, and Al-Tabari. After him are Kabir, Joseph Priestley, Wilhelm Dilthey, Adi Shankara, Jean Baudrillard, and Baron d'Holbach.

Others Deceased in 283 BC