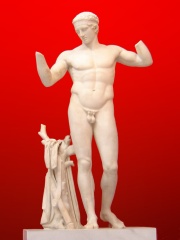 Polykleitos (Ancient Greek: Πολύκλειτος) was an ancient Greek sculptor in bronze of the 5th century BCE. Alongside the Athenian sculptors Pheidias, Myron and Praxiteles, he is considered one of the most important sculptors of classical antiquity. The 4th century BCE catalogue attributed to Xenocrates (the "Xenocratic catalogue"), which was Pliny's guide in matters of art, ranked him between Pheidias and Myron. Read more on Wikipedia

Polykleitos is most famous for his statue of the "Doryphoros" or "Spear-Bearer."

Page views of Polykleitos by language

Among sculptors, Polykleitos ranks 5 out of 189. Before him are Auguste Rodin, Phidias, Myron, and Praxiteles. After him are Benvenuto Cellini, Alberto Giacometti, Camille Claudel, Lysippos, Lorenzo Ghiberti, Antonio Canova, and Constantin Brâncuși.

Among people born in 450 BC, Polykleitos ranks 2. Before him is Alcibiades. After him are Diotima of Mantinea, Cleon, Malachi, Archidamus II, Nectanebo I, Amyntas III of Macedon, Pelopidas, Theramenes, Diagoras of Melos, and Amyrtaeus. Among people deceased in 500 BC, Polykleitos ranks 5. Before him are Esther, Myron, Leucippus, and Ānanda. After him are Artemisia I of Caria, Hippasus, Rāhula, Diogenes of Apollonia, Gorgo, Queen of Sparta, Gaius Marcius Coriolanus, and Obadiah.