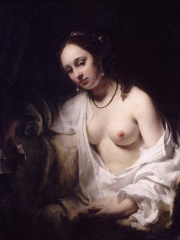 Bathsheba ( or ; Hebrew: בַּת־שֶׁבַע, Baṯ-šeḇaʿ, Bat-Sheva or Batsheva, "daughter of Sheba" or "daughter of the oath") was the wife of Uriah the Hittite and later of David, according to the Hebrew Bible. She was the mother of Solomon, who succeeded David as king, making her the Gebirah (Queen mother). Read more on Wikipedia

Since 2007, the English Wikipedia page of Bathsheba has received more than 2,884,985 page views. Her biography is available in 45 different languages on Wikipedia (up from 43 in 2019). Bathsheba is the 22nd most popular companion (up from 60th in 2019), the 31st most popular biography from Israel and the most popular Israeli Companion.

Bathsheba is most famous for being the wife of King David and mother of Solomon.

Page views of Bathshebas by language

Among companions, Bathsheba ranks 22 out of 673. Before her are Nefertari, Jacqueline Kennedy Onassis, Lucretia, Jane Seymour, Ankhesenamun, and Roxana. After her are Elizabeth of York, Joseph Bonaparte, Aspasia, Victoria, Princess Royal, Catherine Howard, and Olympias.

Among COMPANIONS In Israel