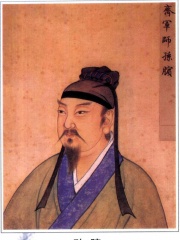 Sun Bin (died 316 BC) was a Chinese general, military strategist, and writer who lived during the Warring States period of Chinese history. A supposed descendant of Sun Tzu, Sun was tutored in military strategy by the hermit Guiguzi. He was accused of treason while serving in the Wei state and was sentenced to face-tattooing (criminal branding) and had his kneecaps removed, permanently crippling him. Read more on Wikipedia

Since 2007, the English Wikipedia page of Sun Bin has received more than 170,755 page views. His biography is available in 22 different languages on Wikipedia. Sun Bin is the 241st most popular military personnel (down from 203rd in 2019), the 154th most popular biography from China (down from 135th in 2019) and the 17th most popular Chinese Military Personnel.

Sun Bin is most famous for his book "The Art of War" which was written in the 2nd century BC. It is a military strategy and tactics manual that has been used by generals for centuries.

Others Deceased in 316 BC