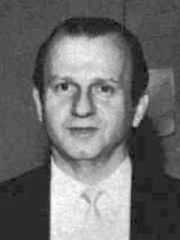 Jack Leon Ruby (born Jacob Leon Rubenstein; April 25, 1911 – January 3, 1967) was an American nightclub owner. He fatally shot Lee Harvey Oswald on November 24, 1963, while Oswald was in police custody after being charged with assassinating United States President John F. Kennedy and murdering Dallas policeman J. D. Tippit about an hour later. A Dallas jury found him guilty of murdering Oswald, and he was sentenced to death. Read more on Wikipedia

Since 2007, the English Wikipedia page of Jack Ruby has received more than 7,257,683 page views. His biography is available in 44 different languages on Wikipedia making him the 8th most popular mafioso.

Among mafiosos, Jack Ruby ranks 8 out of 45. Before him are Al Capone, Billy the Kid, Jesse James, Lucky Luciano, Salvatore Riina, and Bernie Madoff. After him are John Dillinger, Frank Abagnale, Velupillai Prabhakaran, Karl Gebhardt, Meyer Lansky, and Bernardo Provenzano.