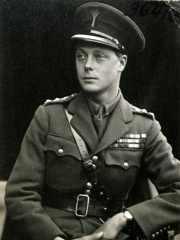 Edward VIII (Edward Albert Christian George Andrew Patrick David; 23 June 1894 – 28 May 1972), was King of the United Kingdom and the Dominions of the British Empire, and Emperor of India, from 20 January 1936 until his abdication that December.Edward was born during the reign of his great-grandmother Queen Victoria as the eldest child of the Duke and Duchess of York, later King George V and Queen Mary. He was created Prince of Wales on his sixteenth birthday, seven weeks after his father succeeded as king. As a young man, Edward served in the British Army during the First World War and undertook several overseas tours on behalf of his father. Read more on Wikipedia

Among politicians, Edward VIII ranks 332 out of 15,710. Before him are Muhammad Ali of Egypt, Seti I, Mehmed V, Khufu, Decius, and Sitting Bull. After him are Indira Gandhi, Sokollu Mehmed Pasha, Numa Pompilius, Abdullah of Saudi Arabia, Ali Khamenei, and Ahmed III.