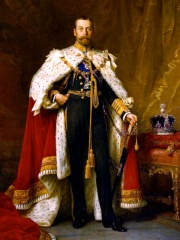 George V (George Frederick Ernest Albert; 3 June 1865 – 20 January 1936) was King of the United Kingdom and the British Dominions, and Emperor of India, from 6 May 1910 until his death in 1936. Born during the reign of his grandmother Queen Victoria, George was the second son of Albert Edward, Prince of Wales, and was third in the line of succession to the British throne behind his father and his elder brother, Prince Albert Victor. From 1877 to 1892, George served in the Royal Navy, until the unexpected death of his elder brother in early 1892 put him directly in line for the throne. Read more on Wikipedia

George V was King of the United Kingdom and the British Empire from 1910 to 1936. He was the last British monarch of the House of Saxe-Coburg and Gotha, and his reign was marked by World War I and the Great Depression.

SB Nation
Roker Rapport Podcast: Previewing Sunderland v Preston with George Hodgson of PNE Live!
Don’t you just hate the International break? Now it’s over our Chris Wynn had a quick chat with PNE fan and LancsLive reporter - George Hodgson - to find out how things are going down Deepdale, and looking ahead to the glorious return to Championship action a…
Editor Gav

Page views of George VS by language